Woke up to see the grounds covered in snow, and wasn’t really be surprised. The world has not been playing by any expected rules, and Mother Nature has joined the game.

I kept seeing articles instructing people not to be too eager cleaning up their gardens, as the insects need those roots and shoots to survive for the coming season. Apparently we need a consistent length of time with the temperature well established in a warmer range. The -6 C of this morning is not in that range.

We had one beautiful day with short sleeve temperatures and sunshine.  I sat outside just taking it all in. Comfy in my chair I leaned back, closed my eyes and listened. To the variety of birdsong, the neighbours children laughing as they play, the dog barking at the squirrels running along the top of the fence.

That day was followed by cooler temperatures and gloomy days of rain.

The only predictable thing about the weather is it’s unpredictability. Maybe May will be better.

Posted by Midweek Musimg at 1:43 pm No comments:

I’m not sure exactly when it began, but our library has a community project to encourage reading. They have placed attractive wooden boxes in various locations about town, filled with books. The books are free and can be taken from the box, borrowed to be read and returned, or kept if so desired.

I have seen the boxes on various streets, and in public locations like the arena.

Today I was out and noticed a box in a beautiful neighbourhood not far from the town park. There is a tree by the sidewalk that now has a metal bench surrounding it, further encouragement for a passerby to sit and check out the books.

I am an avid reader, and book hoarder. When I moved to this much smaller place, I knew it would all work out because there was a spot that was a perfect fit for my bookcases.

Next time I venture out I may just have to check out this box, and take a rest on the bench, or maybe I’ll drop off something new for others to enjoy. 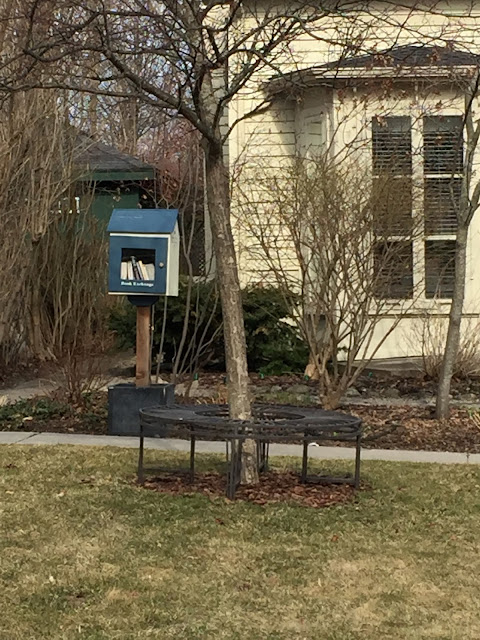 Posted by Midweek Musimg at 5:55 pm No comments:

Pinterest offers such a wealth of creativity, and even when I can’t actually be creative, I can think about and plan, maybe even dream about the projects I’d like to do.

I’ve seen a lot of painted denim, both jeans and jackets. This project has been on my back burner for years, a prepandemic idea. I had even purchased a sort of denim jacket to experiment on.

With another denim project in mind, to make a rag denim wreath with my granddaughter, I had a need for old denim. When my daughter called from the thrift store that jeans were on sale for fifty cents each I told her to get me 10 pairs and I was in business. LOL

Three pairs went to a friend and family, to wear. I cut two pairs up for the wreaths and had pockets and tops for other projects. No excuses not to dive in and try some painting. My hesitation is based on fact I have not done any art work for over a year, and find it hard to get started.

But get started I did. Not bad for a couple days work. 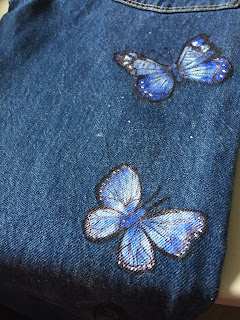 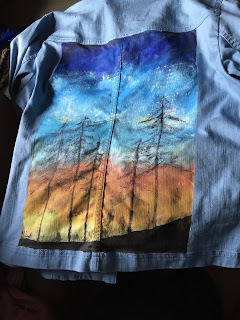 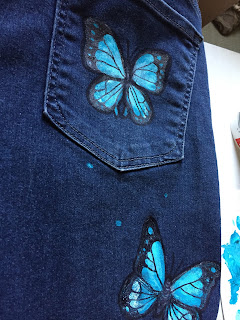 Posted by Midweek Musimg at 5:19 pm No comments:

To clear off the top of my bedside table I crocheted two little holders for the television remotes. I thought I was being very neat and efficient.  Said holders hang off the corner of my bed frame at the head, handy to pick up and replace.

Not too long ago I went to use the remote that changes channels and it didn’t work. I couldn’t get my favourites list on screen and couldn’t select a different channel directly. I assumed the batteries were dead as I couldn’t remember when I had changed them last.

It must have been quite some time as one battery had leaked and I had to clean the crud off the remote.

Everything nice and clean, new batteries, all set.

Within the week the new batteries were dead. Maybe this was because the batteries had been in the cupboard for a long time. I replaced them again, with high hopes, but the replacements were from the same stash. Just in case I purchased new batteries.

A week passed and the batteries died on me again, but this time I was prepared with a pair supposedly fresh and new which I replaced forthwith.

Dead? How can that be? I was perplexed. I started pushing the variety of buttons on the remote in an attempt to get the remote working. I was tired of these marathon viewings on whatever channel I was on when my remote channel changing failed.

Suddenly the favourite channels banner was across the bottom of the screen. With a push of another button the TV guide of channels and listing of shows was on the screen.

It was a ‘light bulb over the head’ kind of moment. I knew exactly what was wrong with all the batteries.

Every time I put the remote in its holder it somehow pressed the cable button and turned it off. Except for the first batteries that had leaked, all the batteries I had tried and discarded were most likely good.

Such a funny cause and effect. Who would have thought that slipping the remote into a pretty crocheted sleeve could cause all that trouble.

But I’m ready if any batteries fail for real, with the set of new ones I’d purchased, and if I get the discarded ones back from my son-in-law I’ll be Girl Scout ready for any AAA emergency.

Posted by Midweek Musimg at 2:41 am No comments:

I have a new project all laid out on the table and find my creativity blocked. Or maybe it’s more a bit of fear of the unknown.

So, of course, I start playing on my iPad to avoid getting started.  One bit of this was looking through my photos. I came upon a couple of pictures I’d taken at the local arena.

It’s been many years since this community centre was built, with its gymnasiums, its meeting rooms, the seniors centre and of course the two ice pads.

When you enter from the back parking lot there is a spacious lobby area, with a wide stairway leading to the upper level of the arena. The landing has glass doors that open to the walking/running track that surrounds the arena seating. This is also where the elevator opens.

The town was very involved in the building of this community centre, in decisions made and in fundraising. One project that was a call out to the community was the flying fish.

The fish are handcrafted creations by people in the community. They are strung across the ceiling in this back lobby area and are at eye level if you’re on the landing by the elevator. I think it’s a wonderful statement that the building belongs to everyone, not just the skaters on the ice. 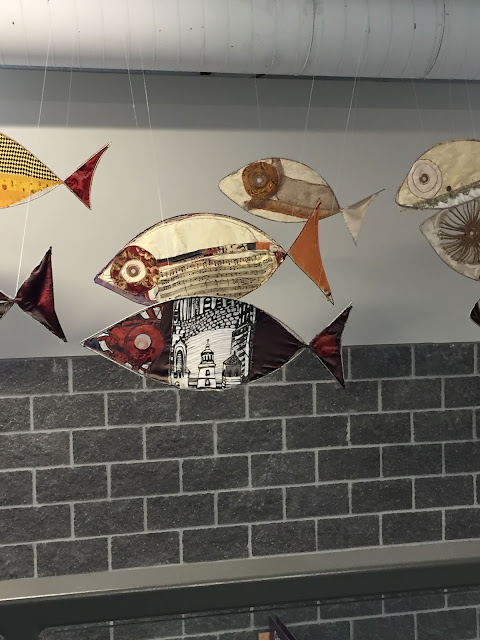 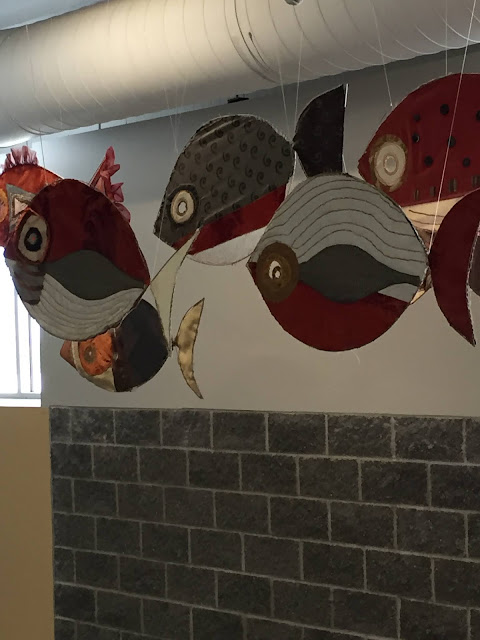 Posted by Midweek Musimg at 6:48 pm No comments:

Just click on the title to go directly to Amazon.